In memory of the Grand Master of our discipline born on September 7, Master Derosière, his disciple, organizes in France two exceptional internships: one at the school of Beuvry, headquarters of our federation, and the other at the school of Saint-Etienne. On this occasion, Master Sathya, Indian Master, guest of honour of Master Derosière, will be present to share this moment with us. Other internships will also be offered.

This is an opportunity for you, students, to participate in a unique event and take a belt test in front of two Masters of Manchuria Kung Fu. 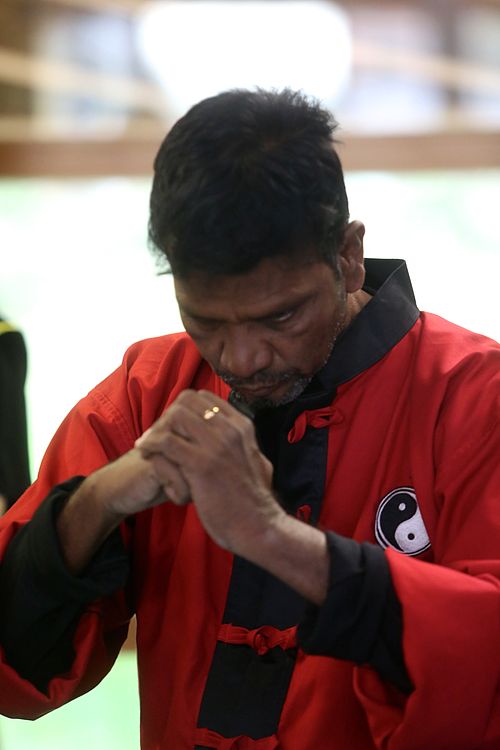 Of Indian origin, Raja Shekhar (9th dan) is the Grand Master of Manchuria Kung Fu. He passed away in October 2014.
Grand Master Shekhar was born on September 7th, so these two weekends will be an opportunity to commemorate his memory together.
He was a direct student of Grand Master Kalai Achony Lee in Hong Kong. His great mastery, his work and his results led him to become the depositary of the secrets of our martial art. Back in India, he founded the International Association of Manchuria Kung Fu, as well as an international training centre in southeast India (Tamil Nadu, near Madras).
Thanks to him, Manchuria Kung Fu is now number one in India, in all styles, in both fight and technique.
The Grand Master has, among other, trained Master Derosière, as well as Master Sathya.

Master Sathya (5th Dan) is a direct student of Grand Master R. Shekhar. He actively participates in the development of Manchuria Kung Fu and perpetuates Master R Shekhar’s teaching in India. He is the president of the Indian association « Mansuria Kung Fu International ». In 1991 and 1992, he was India’s national self-defense champion. He has also received numerous awards (e. g., R.G.R. Award, Bodhidharma Award, Eyecon award).
In September 2015, he was present at the inauguration of the Beuvry School. Guest of honour of Master Derosière, he will return this year during these « Grand Master’s Memorial Days ».

He is also an important politician in India. From 1996 to 2001, he was chairman of the city of Mamallapuram.

Master Derosière (7th Dan) is the representative of Manchuria Kung Fu. He was trained by Grand Master R. Shekhar in India and has become, through hard work, one of his closest disciples.
Since the Grand Master’s death in 2014, he has been committed to passing on his knowledge.
In September 2015 (again on the occasion of the Grand Master’s birthday), he opened his own International School of Manchuria Kung Fu in Beuvry, France (62). This school is the headquarters of Manchuria Kung Fu in France, but also in Europe. Today, it is the only place in Europe where instructors are trained and black belts are evaluated.
This year, the month of September will also be an opportunity to meet together in memory of the Grand Master during various events (internships, belt exam, etc.) that Master Derosière organizes.

This website uses cookies to improve your experience while you navigate through the website. Out of these cookies, the cookies that are categorized as necessary are stored on your browser as they are essential for the working of basic functionalities of the website. We also use third-party cookies that help us analyze and understand how you use this website. These cookies will be stored in your browser only with your consent. You also have the option to opt-out of these cookies. But opting out of some of these cookies may have an effect on your browsing experience.
Necessary Toujours activé
Necessary cookies are absolutely essential for the website to function properly. This category only includes cookies that ensures basic functionalities and security features of the website. These cookies do not store any personal information.
Non-necessary
Any cookies that may not be particularly necessary for the website to function and is used specifically to collect user personal data via analytics, ads, other embedded contents are termed as non-necessary cookies. It is mandatory to procure user consent prior to running these cookies on your website.
Enregistrer & appliquer